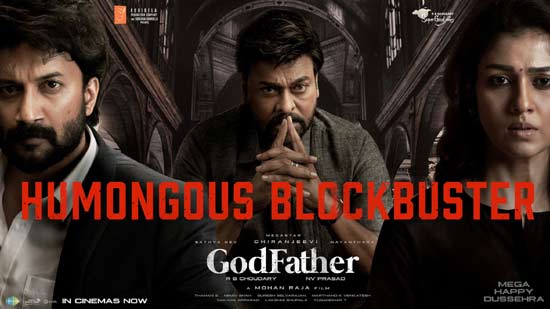 According to the latest PR numbers, the film has collected a solid Rs. 31 crores gross worldwide. With this, the film collected a gross of Rs. 69 crores for two days. Compared to the opening day’s worldwide gross, it is impressive and the coming three days’ collections are key to the film’s success. Trade pundits are expecting that the film will register solid figures this weekend.

To note, God Father was released in only 50% of theaters in which Acharya was released. Also, the ticket price for Acharya is Rs. 250 and for God Father, it is Rs. 150. Collecting this much of impressive collections with decent ticket prices is not an easy thing.

God Father has Nayanthara, Satya Dev, Puri Jagannadh, Anasuya Bharadwaj, and others in significant roles. Thaman S is the music composer of this movie, produced by Konidela Production Company and Super Good Films.