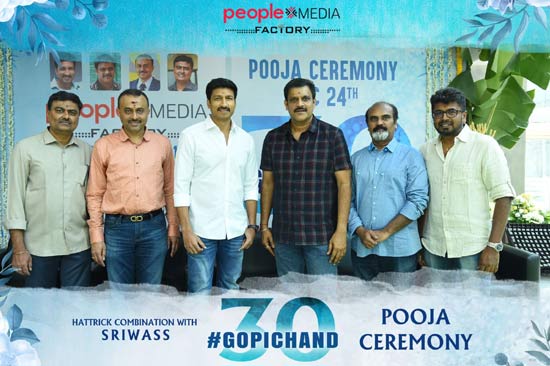 Macho hero Gopichand and director Sriwass are one of the successful combinations in Tollywood. The duo joined hands for the third time for a new movie.

The film marks Gopichand’s 30th one. It has been launched today in a grand manner. While VV Vinayak sounded the clapboard, TG Venkatesh switched on the camera. Legendary filmmaker K Raghavendra Rao did honorary direction for the first shot.

TG Viswa Prasad and Vivek Kuchibhotla will be producing the film under People Media Factory banner. Vetri Palanisamy will handle the cinematography, while Mickey J Meyer will render soundtracks.

Billed to be a perfect family entertainer with hilarious elements and family emotions like Lakshyam and Loukyam, the yet to be titled flick will be made on a high budget.