Grand pre-release event to step up the buzz for Mahanubhavudu
Published on Sep 21, 2017 1:54 pm IST 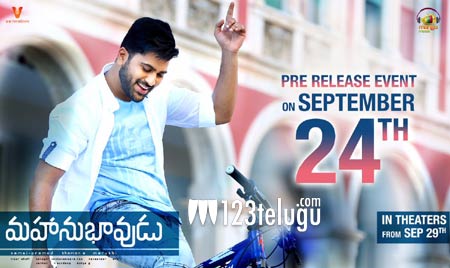 Mahanubhavudu, the Sharwanand and Mehreen Pirzada-starrer romantic comedy, has been generating a lot of positive buzz thanks to the hilarious trailer and the hit audio album. Now, the film’s makers are planning a grand pre-release event to step up the hype ahead of the film’s release.

The pre-release event of Mahanubhavudu is going to be held on September 24th in Hyderabad. Prabhas and several other Tollywood stars will be gracing the event. Maruthi has directed this movie and UV Creations banner has bankrolled it. SS Thaman is the music composer. Mahanubhavudu is slated to hit the screens on September 29.