Gunasekhar reveals details about his next project
Published on Jun 1, 2019 2:24 pm IST 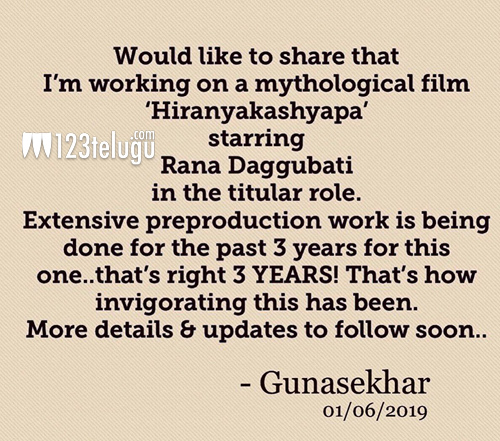 It’s been nearly four years since Gunasekhar’s last film, Rudhramadevi, released in theatres. Since then, there have been a lot of rumours about what his next project is going to be. At one point of time, he had announced that his next film is going to be a historical drama again; however, he didn’t reveal much about what he has been working on, until now.

For the first time in recent few months, Gunasekhar confirmed that Rana Daggubati is going to play the title role in his upcoming film titled Hiranyakashyapa. The director also revealed that he has been working on the project extensively for the past three years, and the mythological film is going to be made with a big budget and on a grand scale.

More details about the project are expected to be revealed soon.