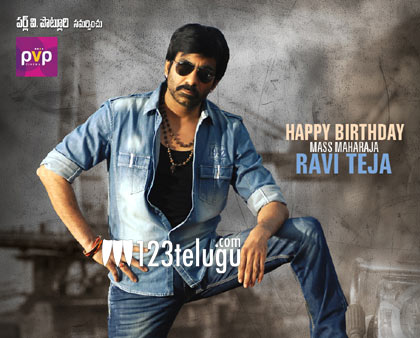 Mass Maharaj Ravi Teja is celebrating his birthday today. Having begun his career in supporting roles in early 90s, Ravi Teja climbed up the ladder in Telugu film industry after going through a lot of struggle. Puri Jagannadh gave him the big break he was looking for with films like Idiot and Amma Nanna O Tamil Ammayi. In mid 2000s, Ravi Teja became a star to reckon with, thanks to films like Vikramarkudu, Venky and Dubai Seenu.

After a brief slump, he came back strongly with Surender Reddy’s Kick which still remains as one of the best films in his long career. Of late, he hasn’t had any hits to his credit but all eyes are on his upcoming mass action entertainer Balupu. Directed by Gopichand Malineni, the film stars Ravi Teja, Shruti Haasan and Anjali in lead roles. The first look was unveiled yesterday evening and the first teaser of the film has got a good response. There’s a lot riding on the success of this film and we hope Ravi Teja bounces back strongly with Balupu. Prasad V Potluri has produced the film. Thaman has scored the music.