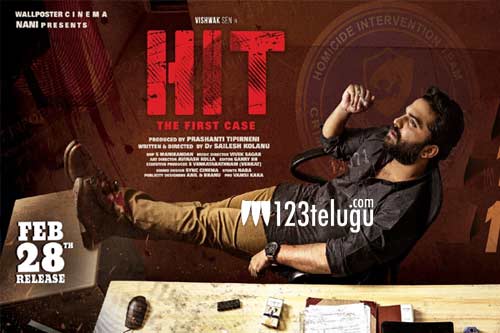 The theatrical trailer for Nani’s latest presentation, HIT, is out just a while ago. The trailer features young hero Vishwak Sen as a cop who is on a mission to find the whereabouts of a young woman who goes missing mysteriously.

HIT’s trailer has an intriguing storyline. The racy cuts, stylishly shot investigation visuals and Vivek Sagar’s riveting soundtrack together create a sense of thrill and drama. Vishwak once again portrays an angry young man who has no issues in mouthing cuss words. Chi La Sow actress Ruhani Sharma appears in a blink-and-miss role in the trailer.

HIT is being directed by debutant Dr. Sailesh Kolanu. The film is being produced by Prashanti Tipirneni under Wall Poster Cinema banner. The film is slated to hit screens on February 28.