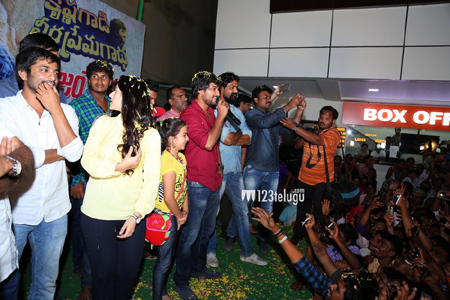 By now, everyone knows that Nani and his team of Krishnagadi Veera Prema Gadha are in a success tour promoting their film. After visiting some theaters in the Nizam area, the unit toured all the interior parts of Andhra.

Reports coming in suggest that the response to the tour has been just amazing. The entire unit has been welcomed with open arms and this has made the KVPG team quite elated. Crowds were gathered in huge numbers just to see Nani, who has become a huge star off late.

The film is also doing exceptionally well overseas and has already crossed the half million mark. Directed by Hanu Raghavapudi, KVPG has Mehreen as the female lead. 14 Reels banner is the production house behind this hit film.