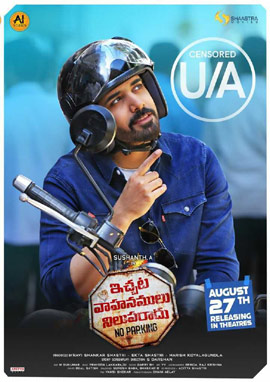 Hero Sushanth and makers of his upcoming film Ichata Vahanamulu Niluparadu are vigorously promoting it, as the release date is fast approaching. Meanwhile, the film is done with its censor formality and it has been awarded with U/A certificate.

IVNR is now all set for release on August 27th. The film’s teaser was well appreciated and songs scored by Praveen Lakkaraju too are winning appreciation of listeners.

S Darshan makes his directorial debut with the film that features Meenakshi Chaudhary playing the leading lady opposite Sushanth.

Vennela Kishore will be seen in a hilarious role in the movie whereas Priyadarshi and Abhinav Gomatam roles will be a surprise.