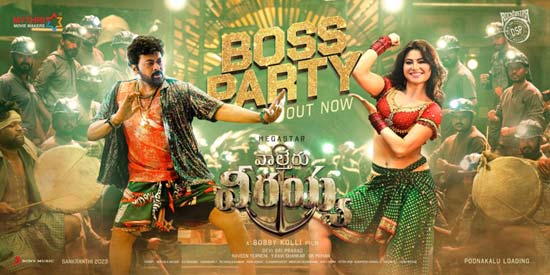 Megastar Chiranjeevi fans are overjoyed with the first single release of Waltair Veerayya. Titled Boss Party, the song has struck a chord with the masses. The mass beats of Devi Sri Prasad worked big time, and the graceful dance moves of Chiranjeevi are attracting viewers.

Bollywood actress Urvashi Rautela sizzled in this peppy dance number. Just a while ago, Urvashi posted a video on her Instagram handle where she was seen practicing a step for the song. This step was very much identical to the iconic step done by Chiru in the Mutamesthri film, where he moves forward in style, holding a cloth beneath his shoulders.

Fans started to comment that the same iconic step would again be repeated by Chiru and Urvashi together. Well, we must wait until the film’s release to know whether this is true or not. Bobby is directing this action entertainer, which also has mass Maharaja Ravi Teja in a vital role.