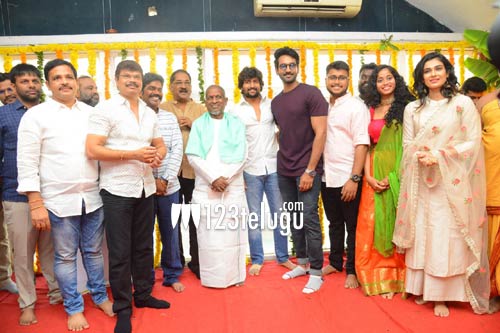 Legendary music composer Ilayaraja, senior producer Allu Aravind, hero Nani and several noted Tollywood celebrities graced the muhurtham ceremony of Aadhi Pinisetty’s new film at Annapurna Studios this morning. The film marks Aadhi’s 21st project and it will be made simultaneously in Tamil and Telugu. Devadas actress Akanksha Singh is the leading lady in the film.

Touted as a sports drama, the film has Aadhi playing an athlete. Young actress Krisha Kurup will be seen as a sportswoman in the movie. Debutant Prithvi Aditya will direct the movie and IB Karthikeyan and M Rajasekhara Reddy will be bankrolling it. The film’s regular shooting will commence from the 17th of this month. The film will be shot in Hyderabad, Chennai, Bengaluru and Madhurai. Ilayaraja will be composing the music for the film.