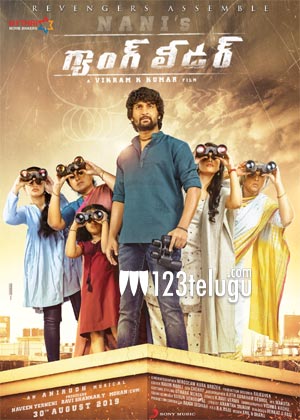 The first look poster for Gang Leader, Nani’s upcoming film in acclaimed filmmaker Vikram Kumar’s direction, was out last week and it raised curiosity. The film’s first single is all set to be launched tomorrow (July 18) and then the teaser will be out on the 24th.

Meanwhile, an interesting update on Gang Leader’s story reveals that the film is a revenge drama. It’s well known that Nani essays the role of a crime novelist in Gang Leader. He gangs up with five females of various age groups and the revenge he sets out to take will be something to look forward to. Apparently, Nani’s role will have a lot of humor and it’s being said to be one of the best in his career.

Priyanka Arulmohan is the film’s leading lady. Mythri Movie Makers banner is bankrolling the film. Gang Leader is slated to release on August 30.