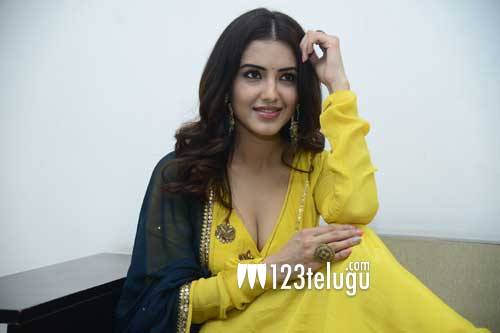 Young beauty Malvika Sharma, who debuted in Tollywood with the 2018 film Nela Ticket, will soon be seen in her second Telugu film, RED. Starring Ram in the lead role, the film is gearing up for a January 14 release. On this occasion, we had a brief interview with Malvika. Here is the transcript.

How did you get the opportunity?

After my first film, Nela Ticket, I started pursuing my extended Law course here in Hyderabad itself. During those days, I got a message from Sravanthi Ravi Kishore sir to meet him in his office. I went and gave a look test and finally came on board for the project.

Frankly speaking, Ram is a very reserved person o sets. But once he comes in front of the camera, the energy he puts in is amazing. I had a great time working with Ram and the entire team at Sravanthi Movies.

Have you watched the original Tamil version of RED?

I watched a few important episodes in the Tamil version, but the story was improvised a lot to suit the Telugu nativity.

Kishore sir is so calm and a sweet person. He has clarity on what he wants from the artistes. He used to patiently explain every scene and makes sure that the best version of me comes out.

Getting a tremendous response for Nuvve Nuvve song?

I’m so happy that the song is being received so well. We shot the song in Italy just a few weeks before the lockdown was imposed.

How are you balancing your profession and studies?

It’s my dream to pursue LLB and eventually LLM. On the other hand, venturing into films is out my passion. As I enjoy both the tasks, I’m loving the phase.

How did you spend the lockdown time?

Initially, for the for three months, I used to watch all the films and web series on the OTT platforms. Later on, I got busy with the assignments related to my Law course.

As of now, I’m listening to scripts in both Telugu and Tamil, but nothing has been confirmed yet.