Intriguing teaser of Rakshasudu released
Published on Jun 1, 2019 10:31 am IST 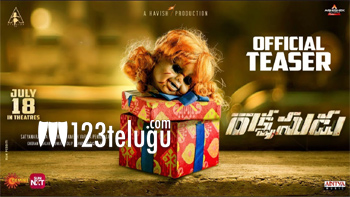 The teaser which we all were waiting for is finally here. Bellamkonda Sreenivas stars in Rakshasudu which is the remake of the hit Tamil film Ratsasan.

The teaser is all about a psycho who is after young girls. The premise is established well and Bellamkonda is seen in the role of a cop investigating the case.

Anupama Parameswaran is shown as the heroine and Rajeev Kanakala plays a key role. The makers have not disclosed as to who is playing the villain in the film.

The teaser is gripping and is elevated with a good background score. Ramesh Varma is the director and Koneru Satyanarayana is bankrolling Rakshasudu under A Studios banner. Havish is presenting the film.