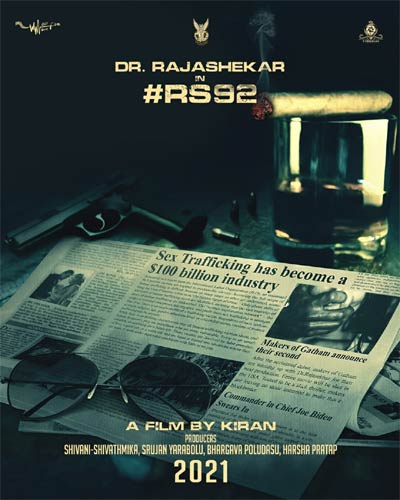 After successfully battling the COVID-19 scare last year and going out of action for a few months, hero Rajasekhar is back in action and how! He recently announced his 91st film, Sekhar, on his birthday. And now, it’s time for the announcement on his 92nd film.

Rajashekar has joined forces with the makers of the recently released indie thriller, Gatham, for his 92nd film. The film’s intriguing theme poster has been unveiled this morning and it hints that the film is based on the $100 billion sex trafficking business. The entire film will be shot in the USA.

While Kiran Kondamadugula directs this as-yet-untitled thriller, Rajasekhar’s daughters Shivani and Shivathmika are jointly bankrolling it along with Srujan Yarabolu, Bhargava Poludasu and Harsha Pratap.