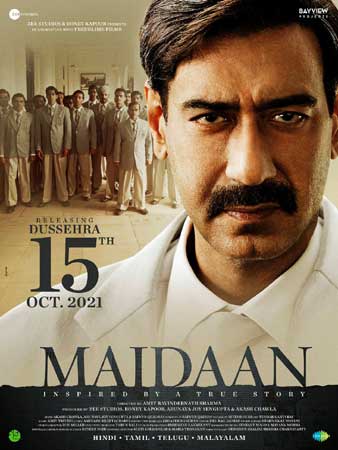 The makers of Bollywood star Ajay Devgn’s new film, Maidaan had earlier announced that the film will have its theatrical release on December 11, 2020. But due to Corona lockdown, the film’s shooting was halted in March after being wrapped up sixty percent of its shoot.

Now, the latest news is that the film’s release has been pushed to October 15, 2021. An official poster with the new release date was released this afternoon by the team. Being directed by Amit Sharma, Maidaan has Priyamani as the female lead.

The film is based on the life story of legendary Indian football coach Syed Abdul Rahim. Boney Kapoor is the producer for Maidaan.