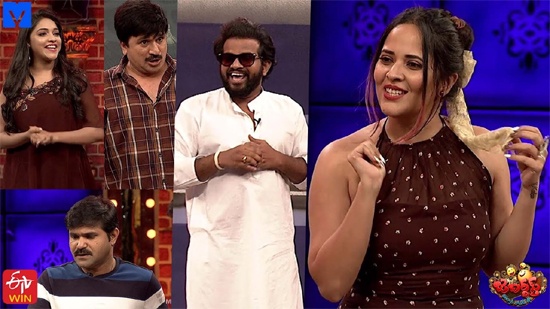 A brand new promo of the upcoming episode of ETV’s Jabardasth, the most popular television comedy show, was released yesterday. The latest promo has garnered more than 35 lakhs of views and 72,000 likes in just 24 hours.

The fun-filled Jabardasth promo has showcased the time machine skit performed by Hyper Aadhi and Anasuya Bharadwaj. Besides, Rocket Raghava’s performance as a bank manager and Venky Monkey’s punches on Chalaki Chanti are the major highlights of the promo.

The promo has gained huge responses from the audience, who made it a trending video on YouTube. The show has Anasuya Bharadwaj as an anchor and Roja and Mano as the judges.

MallemalaTV revealed that the latest Jabardasth episode will be telecasted on the ETV channel on February 3, at 09:30 PM.