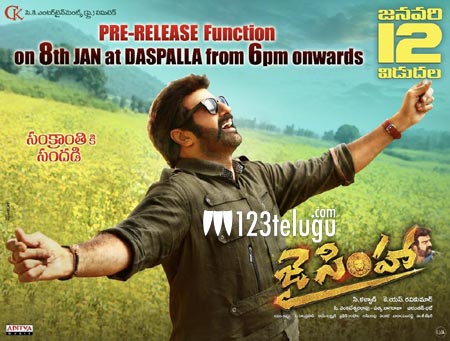 Nandamuri Balakrishna’s much-awaited mass action entertainer, Jai Simha, will be released on January 12, as a Sankranthi festive treat. The film’s censor formalities were completed recently and the promotional activities have begun already.

The latest update on this highly-anticipated biggie is that a grand pre-release event will be held on the evening of January 8 at a star hotel in Hyderabad. Several industry bigwigs, including the film’s cast and crew will be gracing the event.

Jai Simha features Nayanthara as the female lead. Kannada actress Hariprriya and Malayali beauty Natasha Doshi play crucial roles in the movie. Senior Tamil director KS Ravikumar has directed this high budgeted entertainer and C Kalyan has produced it. Chirantan Bhatt’s songs have been getting a positive response from fans.