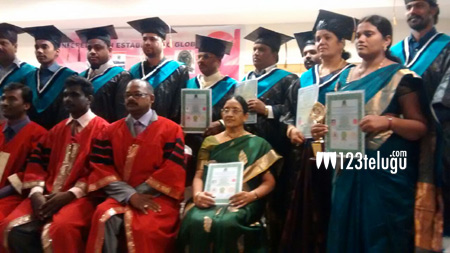 Legendary director Jandhyala redefined the way comedy films were made in Tollywood with some of his masterpieces. Each of his films were gems in their own kind and many contemporary directors and writers take inspiration from his works.

14 years after his death, he has been awarded a honorary doctorate by the Academy of global peace of USA in association with the Swastha Environment and Human Rights Foundation on November 1st. Annapoorna Jandhyala, wife of Jandhyala received the award on his behalf. It is a great achievement, honour not only for Jandhyala but also for Tollywood as he got the doctorate even after 14 years after his demise. Truly, a great tribute to the great soul.