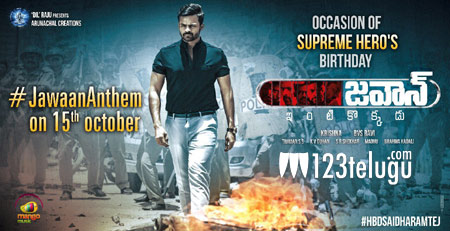 Young hero Sai Dharam Tej’s upcoming social drama, Jawaan, had created a decent buzz when the film’s intense prelude and the title song teaser were released last month. In Jawaan, Sai Dharam Tej will be seen in the role of a responsible youngster who puts his country above of his family.

As per the latest updates from the film’s makers, Jawaan’s first single, the Jawaan Anthem, will be released tomorrow, on the occasion of Sai Dharam Tej’s birthday. Jawaan’s audio album has been composed by SS Thaman. Mehreen Pirzada is the leading lady and BVS Ravi is the director of Jawaan. The film is produced by Krishna under Arunachal Creations banner and Dil Raju is presenting it.