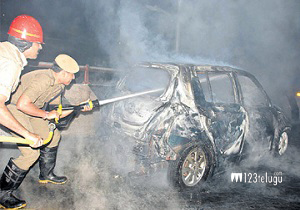 Veteran actress and MLA Jayasudha’s husband Nitin had a close escape yesterday night. His Maruti Swift car burst into flames on the Gachibowli flyover unexpectedly. Apparently, flames broke out due to a short circuit in the wiring.

An alert Nitin reportedly rushed out of the car as soon as he observed smoke coming out of the car. Traffic was disrupted on the flyover and one lane was shut off.

Automotive experts say that the improper installation of extra accessories like high power headlamps etc is a major cause of such fires.