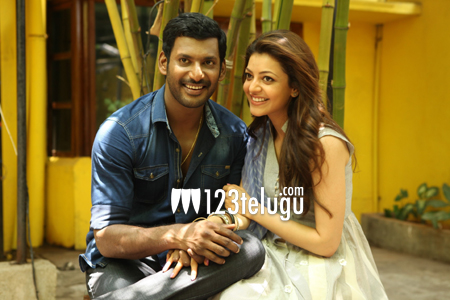 Jayasurya is an upcoming action entertainer starring talented actor Vishal and gorgeous beauty Kajal Aggarwal in the lead roles. Titled Paayum Puli in its Tamil version, the film has Vishal playing a powerful undercover police officer. It is simultaneously releasing in Tamil and Telugu on the 4th of September.

Noted producers S. Narasimha Prasad and G. Nageswara Reddy have jointly bought the Telugu rights of the film. Speaking to the presser in Hyderabad earlier today, the producers said that they are planning a grand release to take advantage of the familiar star cast involved in the film. They are confident enough that the commercial elements will impress the audience big time. Directed by Suseenthiran, the dialogues were penned by popular writer Shashank Vennelakanti. Imman has composed the tunes for the film.