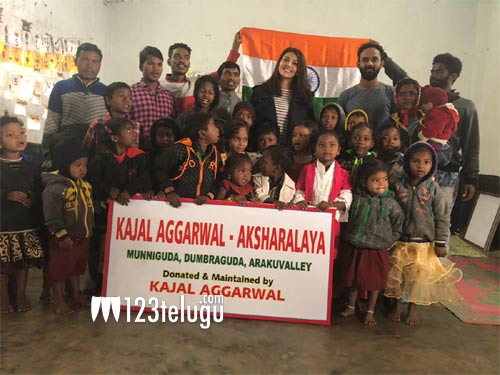 Almost two years after she began working with Think Peace organization, Kajal Aggarwal finally paid a visit to Araku valley to spend time with school children, who were being supported by the NGO. The actress had been playing an active role in raising funds for a school that was built for kids from tribal villages in this region.

In a recent interview, Kajal had remarked that she had never been able to visit the school to meet the kids because of her hectic schedule. “The kids do sent me letters and videos, and have expressed their desire to meet me. I hope to make time to visit them sometime soon,” Kajal had said in December last year.

Finally, the actress went to Aksharalaya in Dumbraguda, Araku Valley on the occasion of National Girl Child Day, to spend time with the kids, and the pictures have now gone viral on the internet. Incidentally, she had run a marathon in Mumbai recently to raise funds for the school.

"And though she be but little, she is fierce." – William Shakespeare
Not just today but every day, let's raise awareness and empower girls to face challenges, stand up for herself, provide a safe, enabling and encouraging environment. #BetiBachaoBetiPadhao #NationalGirlChildDay pic.twitter.com/XibYoxKm7Z