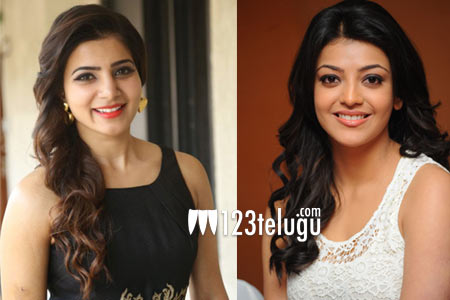 After teaming up for the first time in NTR’s Brindavanam several years ago, leading actresses Kajal and Samantha again acted in Mahesh Babu’s Brahmotsavam. Both the dames got accolades for their respective roles.

Amid reports of professional rivalry and ego clashes, both the actresses laughed off any animosity between them and even showcased affinity between them in their latest interview in which they had several good things to share about each other.

Speaking first, Kajal recollected the funny memories she had shared with Samantha during the making of Brindavanam and Brahmotsavam and even termed Samantha as her dear friend and said that they keep on exchanging pleasantries during special occasions like birthdays and movie functions. Kajal also hailed Samantha’s kindheartedness and her social work through Pratyusha Foundation.

Samantha too had some nice things to say about Kajal, whom she fondly calls Kaj. Samantha revealed how Kajal helped her during Brindavanam’s shooting despite being a star actress already. Sam further said that she has always been wanting to know the secret behind Kajal’s glamour. Finally, Samantha concluded saying that she will invite Kajal to participate in social work through her Pratyusha Foundation.