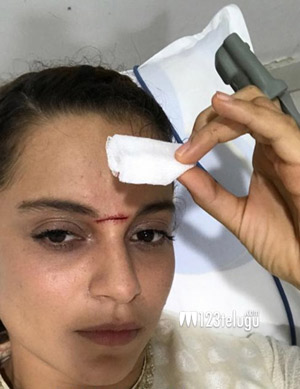 We all know that Kangana Ranaut is playing the lead role in Krish’s new film Manikarnika. The shooting is on in RFC and yesterday a minor mishap happened on the sets.

During one of the major battle scenes, Kangana was injured when her co-star’s sword landed on Kangana’s forehead. The cut left the actress with heavy bleeding and she was immediately rushed to the Appollo hospital in Hyderabad.

First aid was given and the doctors have advised her rest for four days. Speaking about the same, Kangana revealed some pics and stated “I got a genuine and authentic glimpse of the Queen’s life.”