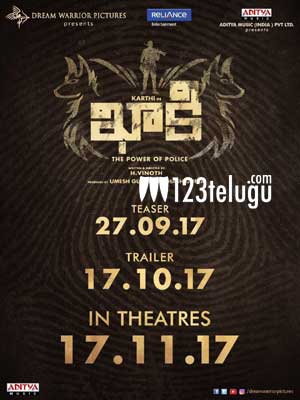 Karthi and Rakul Preet-starrer Tamil film, Theeran Adhigaram Ondru, is going to be released simultaneously in Telugu as Khakee. Karthi will be seen as a powerful police officer in the movie. The film’s makers have just announced the Tamil version’s teaser, trailer and the release dates.

The teaser of Khakee will be released on September 27. The theatrical trailer will be unveiled on October 17, followed by the movie’s release on November 17.
Umesh Gupta, head of popular music label Aditya Music, is venturing into film production with Khakee. H Vinoth has directed this action entertainer.