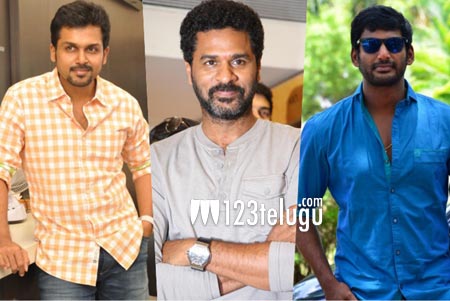 Karthi and Vishal were all set to team up for the first time in their career for Prabhudeva’s upcoming film titled Karuppu Raja Vellai Raja. Prabhudeva had also roped in Sayyeshaa to play the female lead role and the project was launched with great fanfare few weeks ago.

However, in a latest twist of sorts, reports are emerging in Kollywood that both Karthi and Vishal might opt out of the film due to date issues. It’s not yet clear what exactly went wrong and what other commitments of these two actors forced them to take this decision, but it looks like there’s going to be a definite change in the cast.

Rumours are rife that Prabhudeva himself might play one of the lead roles; however, it remains to be seen who gets to play the lead roles in the end. More details are awaited.