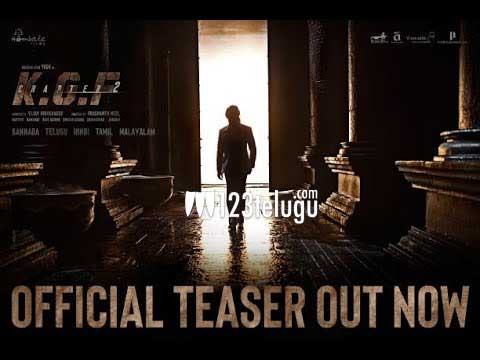 KGF Chapter 2’s teaser is being eagerly awaited by Yash fans and the film’s admirers from across the country. The makers gave a huge surprise by launching the teaser tonight. Needless to say, fans couldn’t ask for more.

The teaser comes with the tagline ‘A promise was once made, that promise will be kept,’ hinting that the second part of this epic gangster drama will showcase the protagonist Rocky Bhai keeping the promise he made to his mother during her death. The teaser has emotions, intensity and heroism blended in equal proportions.

Coming to the visuals, it’s an out-and-out mass treat for fans. The film is mounted on a humongous scale and it’s evident in the few glimpses shown in the teaser. Finally, Yash as Rocky Bhai makes a smashing entry at the end of the teaser and director Prashanth Neel elevates his heroism to the sky.