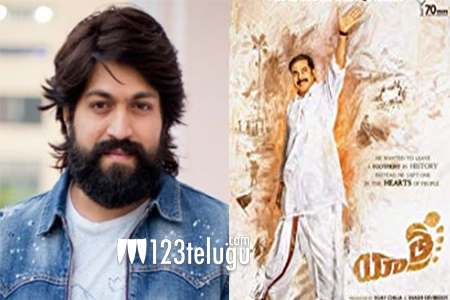 Yatra, the highly-anticipated film on former Chief Minister of erstwhile Andhra Pradesh YS Rajasekhara Reddy, is all set to hit theaters on February 8. Mollywood stalwart Mammootty will be seen as YSR in the film. The film’s Malayalam version will have a grand release along with the Telugu and Tamil versions.

The trailer launch event of Yatra’s Malayalam version will be held in Kochi tomorrow (Feb 4) evening. As per the latest updates, KGF star Yash will be gracing the event as the special guest. Mammukka’s fans have been eagerly waiting to see him in the iconic politician’s role.

Mahi V Raghav is the director of Yatra. Vijay Chilla and Shashi Devireddy have jointly produced the film. Jagapathi Babu, Anasuya, Posani and Rao Ramesh will be seen in key roles.