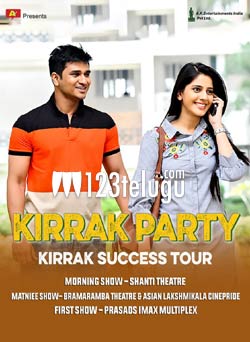 Released on Friday, hero Nikhil’s latest campus drama, Kirrak Party, garnered positive response from movie lovers and critics alike. The film grossed over 6.18 crore worldwide on its opening day and notched up 10 crore plus in just two days. This is Nikhil’s career’s best box-office performance in the first weekend and the film is poised to post a good show on Sunday and the coming week.

To celebrate the success, Kirrak Party’s team is going on a success tour, starting tomorrow in Hyderabad. The tour will later continue in several towns and cities in the twin Telugu states. Newbies Simran Pareenja and Samyukta Hegde are the film’s leading ladies. Debutant Sharan Koppisetty has directed the movie and Anil Sunkara has produced it. Kirrak Party is an official remake of the super hit Kannada film, Kirik Party.