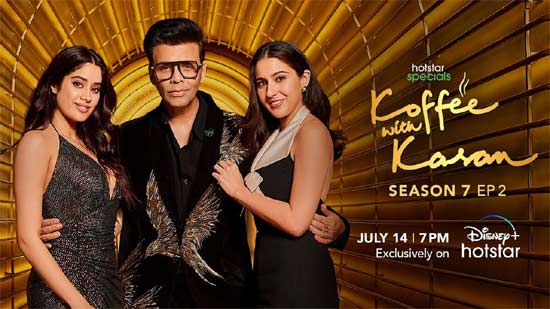 It’s already known that Karan Johar’s popular talk show Koffee with Karan is renewed for a new season and is now available to stream on the famous OTT platform Disney Plus Hotstar.

The promo of Koffee with Karan S7 E2 has been out today. Bollywood beauties Janhvi Kapoor and Sara Ali Khan are the celebrity guests in this fresh episode. In the promo, both the actresses opened up about their crush on the young sensation Vijay Deverakonda.

Karan Johar asks Sara to give him a name she wants a date with. At first, she says nothing but later reveals it is Deverakonda. While Janhvi giggles, Karan immediately says that he often sees Janhvi with Vijay Deverakonda. Then Sara questions Jahnvi whether she likes him much. The entire part happened funnily and to know their crush on the Tollywood actor, we need to wait for a couple of days.