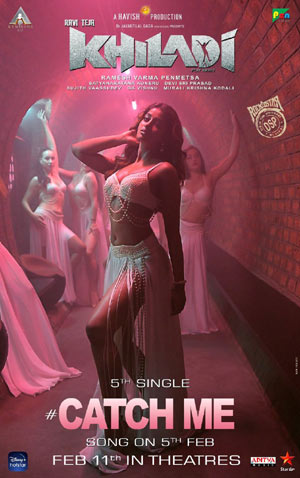 After releasing four hit songs, the makers of Ravi Teja’s Khiladi have announced that another single is coming on February 5, 2022.

Titled ‘Catch Me,’ the new song is billed to be a peppy dance number featuring the dancing diva, Dimple Hayathi. The announcement poster has teased how the song would be.

Directed by Ramesh Varma, the action entertainer has Meenakshi Chaudhary as another female lead.

Produced by Satyanarayana Koneru, the movie has the music of Devi Sri Prasad. The movie is scheduled to release in theatres on February 11, 2022.