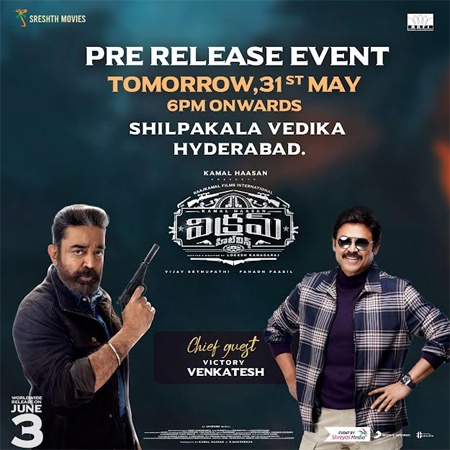 Vikram is one of the most awaited Kollywood movies in recent times. Star-studded with Kamal Haasan, Vijay Sethupathi and Fahadh Faasil, the action entertainer is directed by Lokesh Kanagaraj.

The makers of Vikram have planned to hold a grand pre-release event tomorrow at Shilpakala Vedika in Hyderabad from 6 PM onwards. The latest news is that the star actor Victory Venkatesh will grace the event as the chief guest. Moreover, the entire team of Vikram will also attend the event.

Suriya is playing a powerful role in this biggie, produced by Kamal Haasan and R Mahendran under the Raaj Kamal Films International banner. Anirudh Ravichander has composed music for this pan-India movie, scheduled to release on June 3, 2022, worldwide.