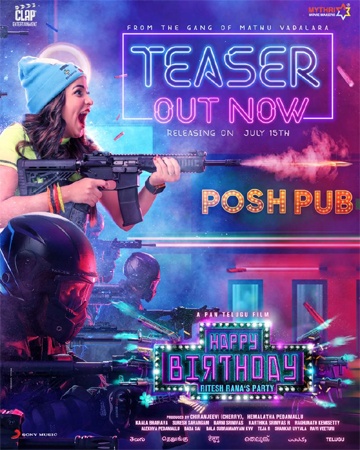 Actress Lavanya Tripathi is coming to enthral her fans and audiences with a new movie called Happy Birthday. Directed by Ritesh Rana, the movie is in the news again.

The makers of the movie have released the teaser of the movie. The teaser looks crazy and quite interesting. Vennela Kishore, a Union Minister, comes up with the proposal of Gun Bill, which is a law meant to regulate the purchase, sale, manufacture and use of guns. And the bill has been passed in the parliament, thus opening the floodgates of gun culture in the country.

Fascinated by weapons, people throng to gun bazaars. In the meantime, a gun themed birthday party is conducted. There’s no entry for the party, without a gun. A special team arrives for the party, leading to a massive firing between the two parties. Kaala Bhairava shows his mark with a quirky background score for the teaser, while Suresh Sarangam’s camera work is laudable.

Naresh Agastya, Satya, Vennela Kishore, Gundu Sudarshan, and others played key roles in this movie. Produced by Mythri Movie Makers and Clap Entertainment, the pan-Telugu movie will be out in theaters on July 15, 2022.