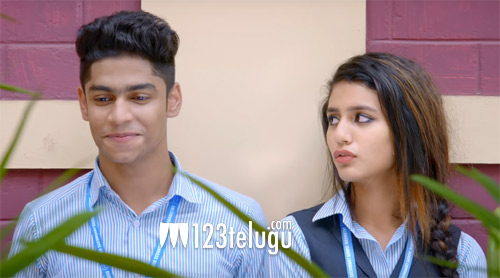 It looks like Malayali teen sensation Priya Prakash Varrier is fast becoming controversies favorite child. After the uproar over the viral Manikya Malaraya Poovi song in her maiden Malayalam film Oru Adaar Love and later her Bollywood debut film Sridevi Bungalow, Priya is back in news for wrong reasons ever since the release of Lover’s Day’s release teaser.

In the teaser, Priya was seen ‘accidentally’ locking her lips with her co-star Roshan Abdul. Since then, there has been a huge controversy about her age. Upset netizens are of the suspicion that Priya, who is now 19-years-old, was below 18 when she had shot for the kissing scene.

On the other hand, several others are criticizing Lover’s Day’s makers for showing a kiss between two high school students. Whether this controversy create any impact on the film’s box-office collections remains to be seen. Lover’s Day will be hitting theaters along with Oru Adaar Love on the Valentine’s Day (Feb 14). Omar Lulu has directed this youthful romantic drama.