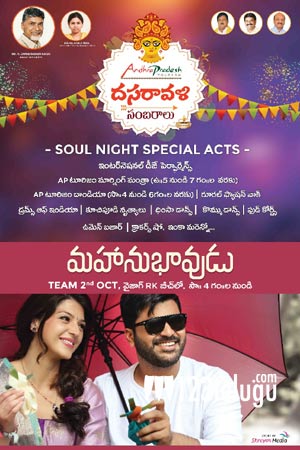 The success meet of Mahanubhavudu is all set to be held at a special event in RK Beach, Vizag on October 2. Directed by Maruthi, the film is poised to be a huge hit and it’s running successfully in theatres with heavy footfalls.

The Dusshera-Diwali special event in Vizag, which is being organised by AP Tourism Ministry, will also see special performances by an international DJ, a rural fashion walk, folk dance performances, fireworks among many other things. And the star attraction of the event is going to be lead cast of Mahanubhavudu who are going to enthrall the audience at the venue.

Sharwanand, Mehreen played the lead roles in the family entertainer which dealt with the theme of OCD. Thaman has scored the music, and it was produced by UV Creations banner.