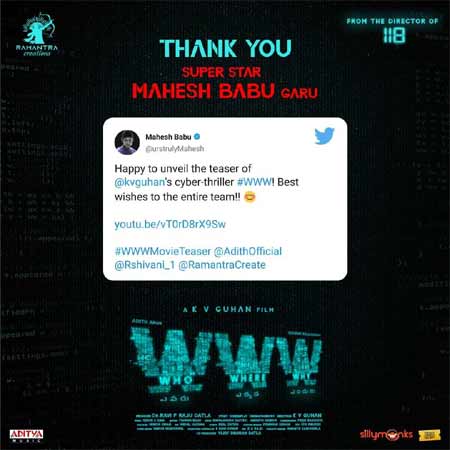 ‘118’ was a film that was a good hit. KV Guhan directed it and now, he is ready with his new film ‘WWW’ (Evaru.. Ekkada.. Enduku.). The teaser of the film was launched by superstar Mahesh Babu.

Billed to be a suspense thriller, the teaser is being well appreciated. Speaking about the same, Mahesh said ” KV Guhan Garu is one of my favorite technicians. I have worked with him in very good films. I am glad to release the teaser of KV Guhan Gari Directorial ‘WWW’. The teaser is very good. I wish the film to become a very good Hit. All the best to the entire team.”

Co-Produced by Vijay Dharan Datla, the shooting part has been completed and the film is currently undergoing its post-production works. We are planning to release the film very soon. Arun Adith, Shivani Rajashekar, Priyadarshi, Viva Harsha, and others are the principal cast