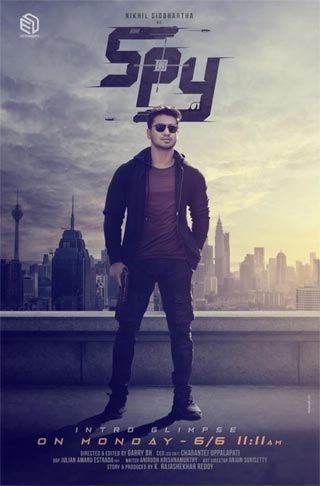 Young hero Nikhil Siddharth will be seen next in Karthikeya 2 and 18 Pages. On the other hand, he is currently busy shooting for another big-budget action thriller, Spy.

Noted editor Garry BH is making his directorial debut with his movie. The latest news is that the movie’s first glimpse will be out tomorrow at 11:11 AM. The makers have released a brand new poster to announce the same.

Iswarya Menon is the lady love of Nikhil in this movie, which also has Abhinav Gomatam, Sanya Takur, Nitin Mehta, Ravi Varma and others in key roles.

K Raja Shekhar Reddy is the producer and the story writer of this movie, which will be released in theaters worldwide this Dasara in Telugu, Hindi, Tamil, Kannada and Malayalam. Sricharan Pakala rendered soundtracks for the film.