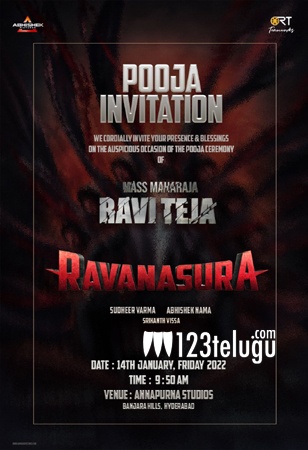 It is known that Mass Maharaja, Ravi Teja has joined hands with the creative director, Sudheer Varma for a film titled Ravanasura.

Produced by Abhishek Pictures and RT Teamworks, the movie’s launch event is scheduled to happen on Sankranthi (January 14) at 09:50 AM in Annapurna Studios, Hyderabad in a grand manner.

Ravi Teja will be seen as a lawyer in the movie. Billed to be an action thriller with a novel concept, the film will have prominent actors and noted craftsmen. The details will be announced soon.