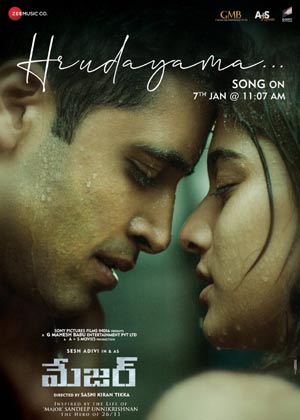 Actor Adivi Sesh reprises the role of Major Sandeep Unnikrishnan in the upcoming Pan India war film ‘Major’. Directed by Sashi Kiran Tikka, the film that was shot simultaneously in Telugu and Hindi and will be released in Malayalam as well.

Meanwhile, the makers decided to kickstart musical promotions of Major with their first single ‘Hridayama’ sung by Sid Sriram and lyrics by VNV Ramesh and Krishna Kanth. Sricharan Pakala has rendered soundtracks and Hrudayama will be out on January 7th at 11:07 AM.