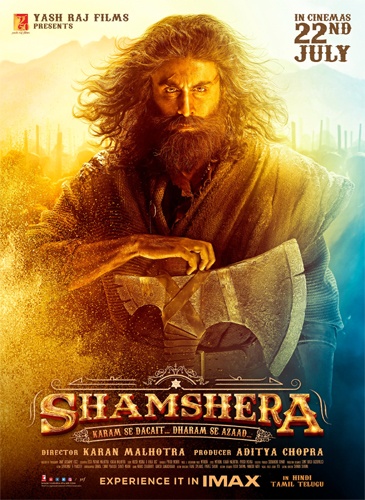 Bollywood actor Ranbir Kapoor, who recently tied the knot with the actress Alia Bhatt, will be seen next in Shamshera. The period action drama, directed by Karan Malhotra, has Vaani Kapoor as the leading lady.

Today, the makers of the movie have officially released the first look poster of the film. The same poster was leaked online a few days ago. The film showcases a different Ranbir with a full-grown hair, beard and moustache. He is playing a dacait in the movie.

Produced by Aditya Chopra of Yash Raj Films, the movie has Sanjay Dutt, Ashutosh Rana, Saurabh Shukla, Ronit Roy and Tridha Choudhury in pivotal roles. Having Mithoon’s music, the biggie will be released in Hindi, Telugu and Tamil on July 22, 2022, in normal and IMAX formats.

Introducing Shamshera – the fierce warrior & the saviour of his tribe. Experience it in @IMAX in Hindi, Tamil & Telugu. Celebrate #Shamshera with #YRF50 only at a theatre near you on 22nd July. pic.twitter.com/QUzDQVckPv