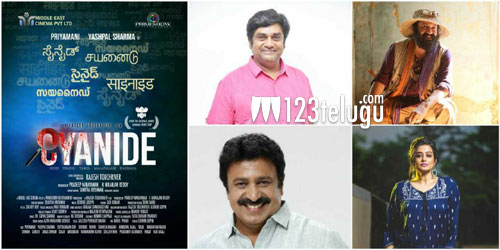 It’s been recently reported that a biopic on the dreaded serial killer Cyanide Mohan is in the making. National award-winning filmmaker Rajesh Touchriver is directing the film and actress Priyamani plays the lead role in it.

According to the latest update,, noted Malayalam actor Siddique and Kannada actor Rangayana Raghu have been roped in for crucial rolea in Cyanide. The film has acclaimed technicians on board. Cyanide Mohan killed more than 20 women with cyanide after sexually assaulting them, and running away with their gold ornaments.

Pradeep Narayanan and Niranjan Reddy are jointly bankrolling the project under Middle East Cinema Pvt Ltd and Prime Show Entertainment banners. The film is being made in all the four major South Indian languages and Hindi.