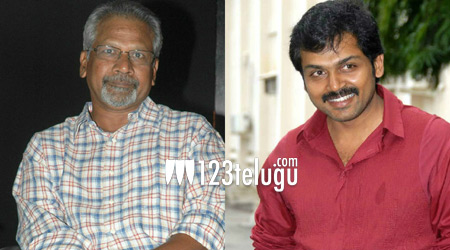 Legendary auteur Mani Ratnam has been awaiting the dates of his former Assistant Director Karthi to commence his next film. Touted to be a romantic drama in typical Mani’s style, this film also features Sai Pallavi as the female lead. In this film, Karthi will be seen as a pilot, while Sai Pallavi will be playing the role of a doctor.

We have recently reported that this film will be shot extensively in Kashmir, where Mani shot his yesteryear classic, Roja. And here’s more to the film’s Kashmir backdrop. Latest reports suggests that Mani will be exploring Roja in a whole new perspective in his latest film.

While it won’t be a remake or a sequel to Roja, the Mani-Karthi film will surely have shades of Roja, according to the reports. The shooting of the film has been pushed to September. AR Rahman will compose music for this film.