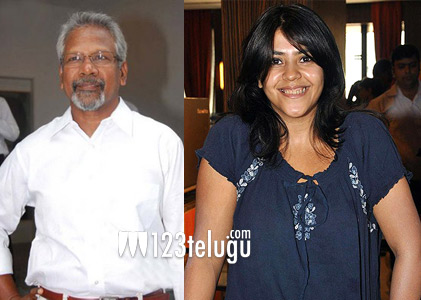 Bollywood is abuzz with rumours that Ekta Kapoor is going to co-produce Mani Ratnam’s upcoming film in Hindi. This Comes as a big surprise since the kind of films which Ekta Kapoor has produced and distributed in the past have absolutely no connection with Mani Ratnam’s style of filmmaking. Of late, Ekta Kapoor has been constantly trying to push herself out of her comfort zone and collaborate with acclaimed filmmakers like Karan Johar, Anurag Kashyap, Vishal Bharadwaj, Vikramaditya Motwane among many others. Now, she seems to have convinced Mani Ratnam to let her produce his film.

After the debacale of Kadali, rumours were rife that Mani Ratnam’s next film is going to be a period love story set in the backdrop of partition. In fact, Mani Ratnam had roped in Rensil D’Silva to write the script. It still remains to be seen what exactly Mani Ratnam and Ekta Kapoor end up doing and only after finalizing the script, they’ll announce the rest of the cast. A R Rahman is expected to team up with Mani Ratnam once again.