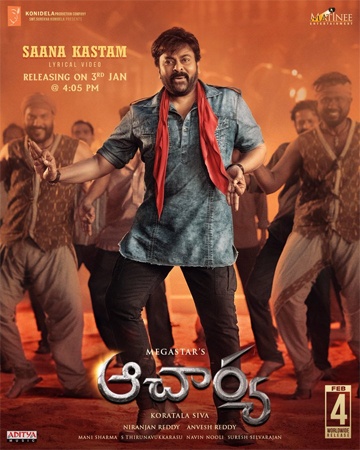 The much-awaited Tollywood movie, Acharya featuring Chiranjeevi and Ram Charan, is slated for February 4, 2022 release. Meanwhile, the makers have been raising expectations by releasing promos and songs.

As a part of that, they have announced that the 3rd song, Saana Kastam, from the movie will be out on January 3 at 04:05 PM. Said to be a mass song, the makers have released a mass poster featuring Chiranjeevi with a rugged look.

Beautiful actresses Kajal Aggarwal and Pooja Hegde are playing the female leads in this action drama, which is directed by successful director, Koratala Siva.

Manisha composed the music for Acharya, which is jointly produced by Matinee Entertainment and Konidela Production Company.