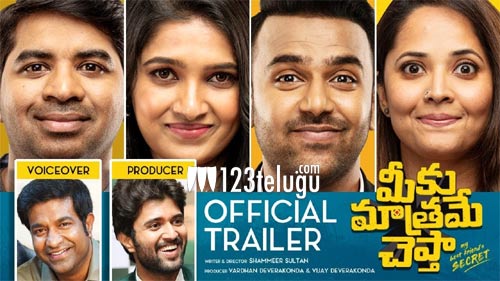 Meeku Maatrame Chepta is a film that has been awaited eagerly as it is Vijay Devarakonda’s first production venture.

The film’s trailer was released today and it looks a lot of fun. The film is all about a small video featuring the hero Tharun Bhasker and how he gets into trouble with it.

The premise and situational comedy look good and the performances from Tharun and Abhinav Gomatam are apt.

The trailer evokes decent fun and has a small suspense too. If the same fun is generated in the film’s proceedings, then this film will surely strike a chord with the audience.

Debutante Shammir has directed this film which has Anasuya in a key role.