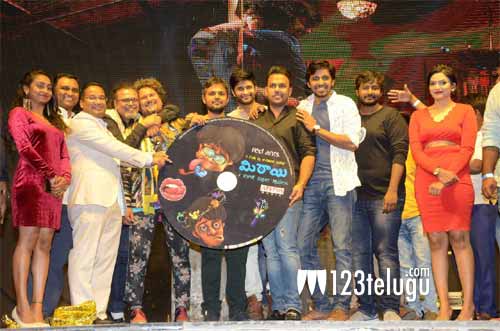 The audio album of the much-talked-about dark comedy, Mithai, was unveiled yesterday. Pellichoopulu fame Vivek Sagar has scored the soundtrack for Mithai. Young comedians Rahul Ramakrishna and Priyadarshi are the male leads in the movie, while Aditi Myakal and Shweta Varma is the film’s female lead.

At the audio launch event, the entire team of Mithai exuded confidence in making the audiences laugh in the theaters. “It is our responsibility to make you ‘laugh out loud'”, said Priyadarshi. Already, the teasers and trailer have been creating a decent buzz for the movie.

Debutant Prashant Kumar is the director and his brother Prabhat Kumar is the producer of Mithai. Aditi Myakal plays a key role in the movie. The film is slated for release on February 22.