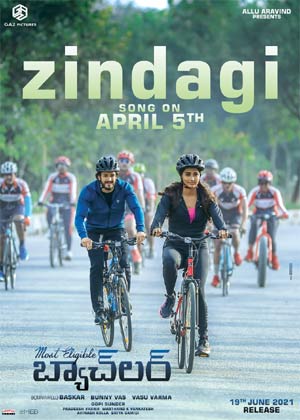 Here’s the much-awaited update on Akhil Akkineni and Pooja Hegde’s upcoming romantic entertainer, Most Eligible Bachelor. Composed by Gopi Sundar, the ‘Zindagi’ song from the film’s audio album will be launched on April 5th. The makers revealed the launch date with a special poster that featured both Akhil and Pooja as cyclists.

Most Eligible Bachelor has been in the making since a long time. The film’s success is very crucial to Akhil and his director Bommarillu Bhaskar. MEB is being jointly produced by Bunny Vas and Vasu Varma. The film is slated to hit screens worldwide on June 19th. Veteran producer Allu Aravind is presenting the movie.