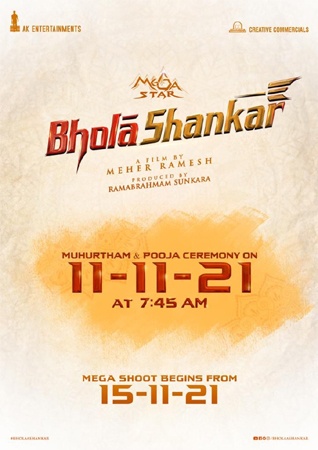 It is well known that Megastar Chiranjeevi will star in Bholaa Shankar, an official remake of Kollywood star Thala Ajith’s Vedalam. Bholaa Shankar will be directed by Meher Ramesh and it has Keerthy Suresh playing Chiru’s sister.

This morning, Bholaa Shankar’s team announced that the film’s muhurtham and puja ceremonies will be held on November 11 at 7:45 AM . The film’s regular shoot will commence from November 15. A major part of shooting will take place in Kolkata. The name of the actress who will be paired opposite Chiranjeevi will be announced soon.