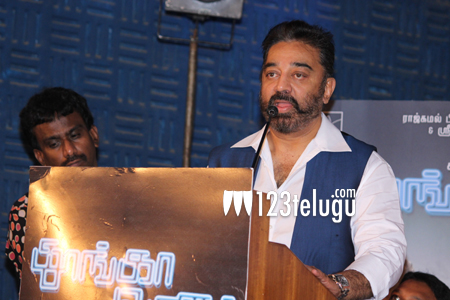 Legendary actor and filmmaker Kamal Haasan is back with the riveting suspense thriller, Cheekati Rajyam. This Telugu-Tamil bilingual film’s trailer was unveiled yesterday and speaking on the occasion, Kamal said that he has done 24 bilingual films in his career and that it is a daunting task to do bilinguals and that he has now learnt the trick to execute them effectively.

Speaking further, Kamal said that he is targeting to win the patronage of 17 crore moviegoers in Tamil Nadu and the Telugu states for both the versions of the film. Cheekati Rajyam promises to be a slick action thriller in the backdrop of drug mafia and the search for a missing son.

Trisha, Prakash Raj, Sampath Raj, Kishore and Madhushalini will be seen in prominent roles in the film which is directed by Rajesh M Selva.