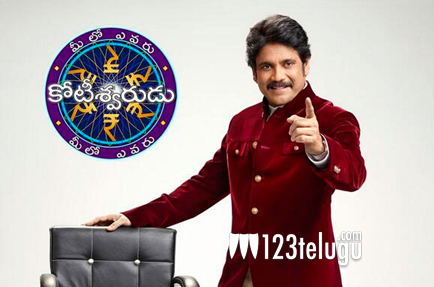 King Akkineni Nagarjuna has scored a bit hit with his tv show Meelo Evaru Koteeshwarudu. The show has received very high TRP ratings and it has become a household name in Andhra Pradesh, much to the surprise of big tv channels.

Nagarjuna has completed shooting for the first season and 40 episodes have been shot on the star hero. The second season of the show might commence soon and a new announcement might come at a later stage.

Mee Lo Evaru Koteeshwarudu is the Telugu version of the popular gameshow Kaun Banega Crorepati, that is hosted by Bollywood Legend Amitabh Bachchan in Hindi.